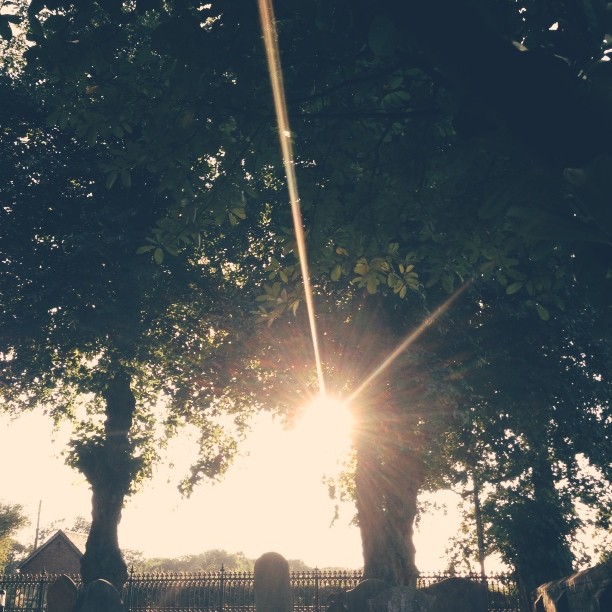 My Granddad came back to the UK earlier this year. It was expected, but erm, still unexpected. So you know, that was a mindfuck to start with. And then he arrived, and I took The Smalls to see him. I was mildly freaked out by how much he had deteriorated. But at the same time, it really was ok, because I could start to say goodbye.

I’ve been doing that for aaaaaaaages. So it’s a whole lot easier now.

I didn’t say anything, but he’s actually remained in the UK this whole time. He was meant to go back, but he got really ill. Like, hospitalised ill. Fits, seizures, pain, dementia – all the suff you would expect from someone who is 86.

That’s like, nearly my current life, three times over.

And he’s not wasted his time, either. Dude has LIVED. He’s a bit epic, and has done all sorts of things for his (the) church and his (the) community, and a load more besides. He’s seen his kids, his grandkids and his great grandkids. He’s travelled a good deal of the world, and has spoken with many people in power. And he can belch like nothing I have EVER HEARD.

He’s been keen to get back to Jamaica, because he wants to tie up loose ends. I think he was hoping to clean up over there, then come back here for good. Here he has a better support unit, and of course, what’s left of the NHS (he previously spent most of his life in the UK, so has a good understanding of the system here). Personally, I thought that idea went down the pan the minute he was first sent to hospital. He’s gotten worse, and pretty bloody quick.

My mom called me up yesterday, Tuesday, in a blind panic. Granddad had another seizure, only this time he wasn’t responding, and when he finally did, it was WAY worse than before. I cried with her for a bit, then as she described what was happening, I felt an alarming numbness and paralysis, which REALLY threw me off kilter. Surely I should be in hysterics, like she was? Surely I should be freaking the hell out? My granddad is about to DIE, and there’s nothing I can do apart from sit back and await news, good or bad. Further news was that he was responding, VERY slowly, and that they wanted him fitted with a pacemaker to sort out the seizures.

A friend advised I get moving. Quite literally, get moving. Not necessarily go and visit, but I should sure as hell make myself mobile, as the longer I sat there the harder it was all going to become. I grabbed a notebook and pen, some useful personal effects, cleared my mind and got in the car. No idea where I was going, but thought I’d just go with it.

Ended up in a C of E church graveyard, in the middle of nowhere. At first I thought it was an odd choice, given I have no desire for religion at all. And then I realised Granddad had been a choirboy in a C of E church, and a strong adoration for the English countryside. Huh. I started writing, and realised I was trying to contact him, in a way I don’t care to explain right now. But it worked for me.

I have come to realise a number of things, which I previously hadn’t been able to explain. And now I can explain them there’s an even greater sense of calm.

You know how you have a pet, which has a great life, and is comfortable, and then gets Really And Incurably Ill in its last few years? And you do whatever you can to save it, including masses of treatments, drugs, and operations, feeding it special foods and making it as comfortable as possible, even though you know it’s in ridiculous pain? And you know that, if that pet had a chance, it would crawl under a rock/bed/cave/blanket and die peacefully and quietly? But because you love that pet so much, more than anything, you try to keep it alive as long as possible?

Only, I’m the only one who wants to let the pet go.

I’m the only one who senses the pain and discomfort, way more than I would feel the grief.

And it’s so hard…because while I know Granddad has a fight left in him, I wonder if – no. I actually think it would be better to let him go. As I type this post, he’s having surgery to have the pacemaker fitted. This makes me very uncomfortable, because I wonder whether his family have committed him to more years of unnecessary pain. The only advantage I see in him having this thing fitted, at the age of 86, with dementia, and degenerative muscle and bone complications, and arthritis, and God Only Knows what else, is that it may give him long enough to crawl under a rock/bed/cave/blanket and die peacefully and quietly.

Only this time, it’s the possibility that he may have JUST enough strength to fly back to Jamaica to pass away.

My truly adored Granny is buried there, and that’s where my Granddad belongs.

I cannot express how much I dislike him having the pacemaker fitted. I abhor the very idea. Don’t get me wrong; I don’t hate pacemakers, as I know that they have spared the lives of people who truly were not ready to go yet. But this circumstance, well it just doesn’t sit right with me. It doesn’t fill me with “the hope of him enjoying the rest of his life like a happy and comfortable person”. It feels like a selfish way of prolonging the inevitable.

I guess I could say that, as I’m only his granddaughter, it’s different from my point of view. He isn’t MY OWN dad. (For the record, if this were my own dad as I know him now, I would still feel the same. And I know that for a fact.) I know I can’t call any shots on this; I am not one of his children.

Who are we to dictate? Who are we to decide? We’re his family, that’s who. But now there is a divide, and it’s not good. I suspect I’m the only member of our family who actually feels this way.

Granddad deserves peace. He should get that. It’s his time.

It’s just that. It’s his time.